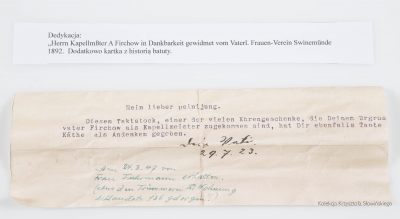 Black baton, richly decorated with metal fittings and a band; cylindrical body, visually divided into three parts; mid-section wrapped with a narrow metal ribbon with an engraved inscription; on both sides of the ribbon, metal rings with engraved twigs; grip has a long fitting with two rings engraved with different motives of floral twigs (one of them, with pentadactyl leaves, can be found in baton JSW 119 from J.S. Witkiewicz’s collection), finished with a flattened knob, trimmed with a floral ornament; long tip fitting, adorned with two rings with twigs, analogically to the grip; tip of the baton is rounded, finished with a small metal ball. As per inscription, the baton was presented to bandmaster  A. Firchow in 1892 in Świnoujście (then Swinemünde,  Prussia) from the members of the German Patriotic Women’s Association (a charity supporting war veterans). The baton was accompanied by a short letter from the family, dated 29 July 1923, in which aunt Käthe commits the commemorative baton to bandmaster Firchow’s grandon, Heinijung. The letter was accompanied by a note dated 24 March 1947, ascertaining the recovery of the baton by Ms. Fuhrmann in the ruins of 136 Uhlandstrasse (in an unknown city - Berlin? Wrocław?). The baton was purchased in Poland.

Joanna Gul based on information provided by the owner

<< Back
© Narodowy Instytut Muzyki i Tańca
The texts, photos, films, translations and other contents of the site
are protected by copyright laws. Their use or reproduction, even partial, is prohibited without previous approval from the National Institute of Music and Dance.